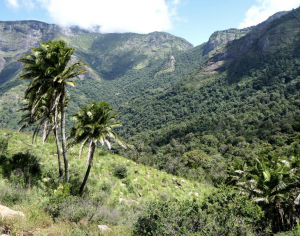 "Thank goodness we ended up living on the Milgis Lugga!!! NO wonder we are in a good mood every day! Can you imagine waking up to this year in, year out.. We are surrounded by song from the birds and the people AND not only that... These days we hear lions every night.. and sometimes we are even lucky to see them! Elephants are the norm every day, browsing peacefully up and down the luggas, on the hills and even up into the top of the mountains. Who would have believed that 25 years ago!!?

"A while back we were part of a BBC film - 'Human Planet', a clever documentary series showing the world how wild animals and humans can rely on each other in the natural world to exist... Our part was in 'Rivers'. Mark Deeble was the cameraman. It was all about how the nomads use elephants to survive and vice versa.. Elephants have an amazing ability to know where the water is closest to the surface in a dry lugga, they dig in the sand for this precious resource! Every year the place to find water is different because these huge luggas change their course after every flood. So where do the nomads come into this??

"Imagine you are on the move with your family and all your animals, you've just crossed the searing hot Kaisut desert and now arriving on the Milgis Lugga, probably pretty thirsty. Where do you start to look for water?? At first glance there's just miles and miles of sand ... But to their absolute relief coming across elephant tracks mean's water is not far and to follow them!! The Nomads will then make a proper well for their use and move on. Over the next few dry months the water level will get deeper and eventually the elephants will rely totally on the human dug wells for their survival." - Helen Douglas-Dufresne, Founding Director of Milgis Trust 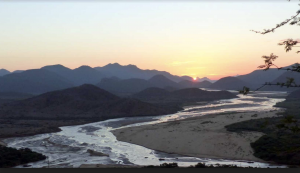 Conservation issues from the manager

"The past year will go into Samburu history as the year when the tribe started the new age group, Lkiseku. The preparations for this are marked by the killing of a white bull on top of mount Nyiro and one year later a new age set is initiated through mass circumcision of boys. Each of the 8 clans of the Samburu come together and form big villages (lorora) sometimes as big as 500 households in one compound. The preparation involves intensive use of vegetation and wildlife resources. The villages are fenced using tree branches, the building of houses, the bows and arrows all require trees to be cut. The ceremony’s also need thousands of ostrich feathers and pieces of lion skin. Given today’s population, these activities had potential to cause a lot of damage on the surrounding forest and wildlife. We visited the 8 villages within our area of operation and talked to the community about the negative impact of cutting down whole trees. Instead advised them on pruning, we helped those who could not get ostrich feathers to get some sustainably, we collaborated with the Kenya wildlife service to provide lion skins to prevent the killing of lions for the skin. We are pleased to report that the ceremonies were completed with very little negative impact." - Supukan Lesoloyia, Manager at Milgis Trust 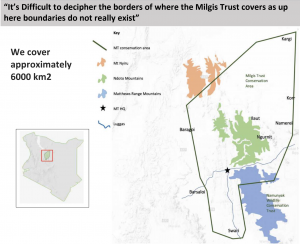 Perhaps the most notable success of the Milgis trust has been the restoration of the free-roaming elephant population. Northern Kenya is unique in that elephants and people share the space with incredibly little conflict. However due exponential population growth (both elephant and human) , we have had to build an elaborate program to mitigate poaching and Human elephant conflict (HEC). We are pleased to report that it has been a good year for elephants. The unknown disease that killed so many elephants last year has slowed, and thank to our elephant friendly wells there has been a drop in HEC.

Widespread rainfall has meant that the Grevy's Zebra were able to venture further and we now have 70 individuals roaming in and out of the area. Thanks to our rabies and distemper vaccinations, groups of 30 Wild Dogs have now become a common sight. The lions are making a very strong recovery due to their ability to breed quickly. There is a lot of food for the lions and they have been making the most of it. Currently there are between 21-25 lions living in the Milgis ecosystem. They have also been preying on livestock recently, which has caused quite a bit of human wildlife conflict, especially in Leamo area. 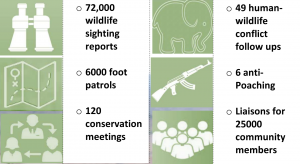 Read the full PDF of the update: