Marathon des Sables was gruelling! I faced many challenges while running the Sands, but just took it one day at a time. Running an ultra marathon every day was not an easy feat, but doing it for a greater cause proved to be very motivating! The people I ran with were amazing, including my friend Andy Symonds, who wrote an article on the event and drew a cartoon of us in the tent (click on the image to read the full article): 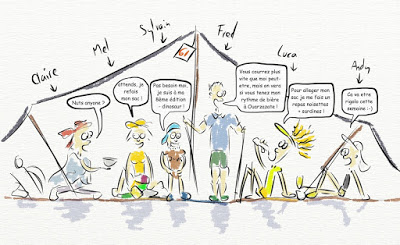 “And so it is, 1200 people find themselves under 200 side-less tents, pitched in a large three-deep circle. Over the course of a week this desert-circus-camp migrates its way across the sand…” – Andy Symonds, Le Marathon des Sables – Running about in the sand for a week

Thanks so much to all those who supported and cheered me on! Want to get involved? Check out the great charities that BARAKA supports.

Here are some more articles on BARAKA running in the MdS:

The journey in pictures